Usually, if I were to go deploy somewhere with IP-Max, I settle down on top of (or underneath, or in some way physically close to) their router at a point of presence of theirs. In Amsterdam though, it was different … because IP-Max had not yet built a PoP here.

But I ask: why would that stop us? Fred told me last year that he had always wanted to build out a PoP in Amsterdam, but somehow he never really found the time. I offered to do the work to organize the local supplier chain, get a good spot in a well connected place, long haul to France and Germany, and otherwise exercise my (social) network to get it done.

In March 2021, I stumbled across rackspace at NIKHEF by working with the folks from ERITAP who got their hands on something that is less of a commodity: a full rack + power (the facility is always chronically oversubscribed).

A few chores on the tasklist:

The most important piece of planning is around the long haul connectivity. Considering IP-Max already operates a circuit from Frankfurt (Germany) to Anzin (France), I arranged for that link to be rerouted through Amsterdam and broken into two segments: Frankfurt-Amsterdam and Amsterdam-Anzin. I was like a kid in a candy store being able to meticulously choose the route that the fiber takes – over Düsseldorf, entering the Netherlands at Emmerik, over Arnhem and Ede, and to Amsterdam. A very direct route, using a 10Gig DWDM wave.

The other span goes from Amsterdam through Antwerp (Belgium) and Brussels and finally landing in Anzin (near Lille, France), which was the previous 10Gig DWDM wave, so there is no increased latency even though the link is broken up in Amsterdam. Yaay!

Delivery of the DWDM waves was ordered on March 30th, and although it should normally take 25 working days to deliver, for some awkward reason with the supplier it was going to take way longer than what we could afford, so a spot of VP style escalation took place, and oh look! Now it would take four weeks to turn up, was completed last Friday, which was just in time for our trip. Double yaay! 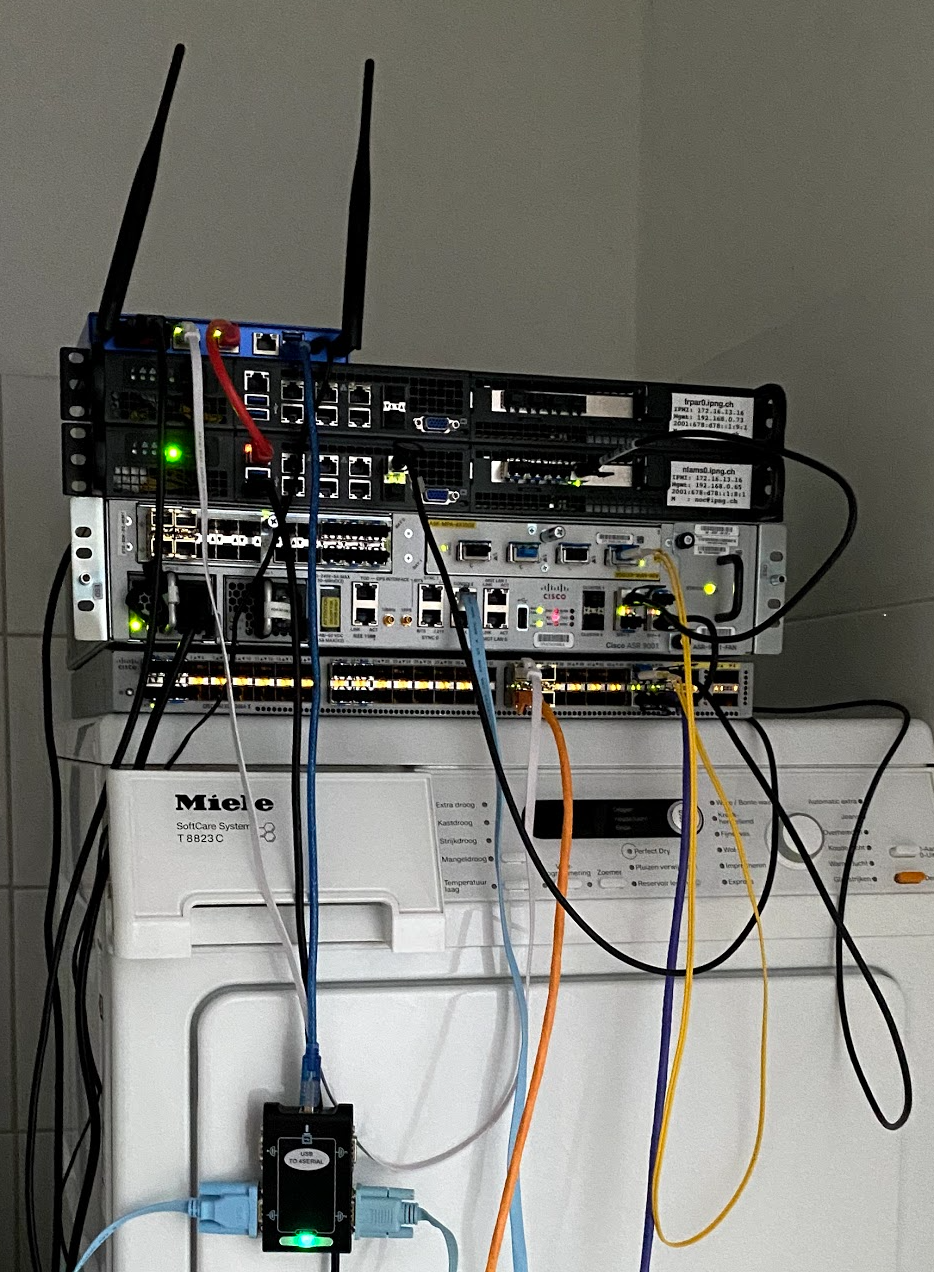 Because this is a completely new site for IP-Max as well as IPng, we’ll have to do a bit more work. And this suites us just fine, because after driving through Frankfurt (see my previous post), to the Netherlands, we have to stay in quarantine for five days (or, ten if we happen to fail our PCR test after five days!), which gives us plenty of time to stage and configure what will be our Cisco er01.ams01.ip-max.net and our Nexus as01.ams01.ip-max.net.

Of course, figuring out how all of this fits together is a nice exercise, and we planned to just plug and play the ASR9k, which worked out rather successfully by the way, so it had to be completely configured ahead of time. We created the interfaces, DNS, routing protocols like OSPF, OSPFv3, MPLS/LDP, BGP and all of the good stuff like ACLs, accounts and et cetera.

We staged the stuff in the laundry room of our AirBnB, being actually quite grateful once the staging was complete and we could turn the machines off.

For IPng, staging nlams0.ipng.ch was already done ahead of time. So all I really needed for it, was to ensure that the EoMPLS circuits were created ahead of time. I was really looking forward to seeing if we could beat 14ms to Amsterdam on the IP-Max network. 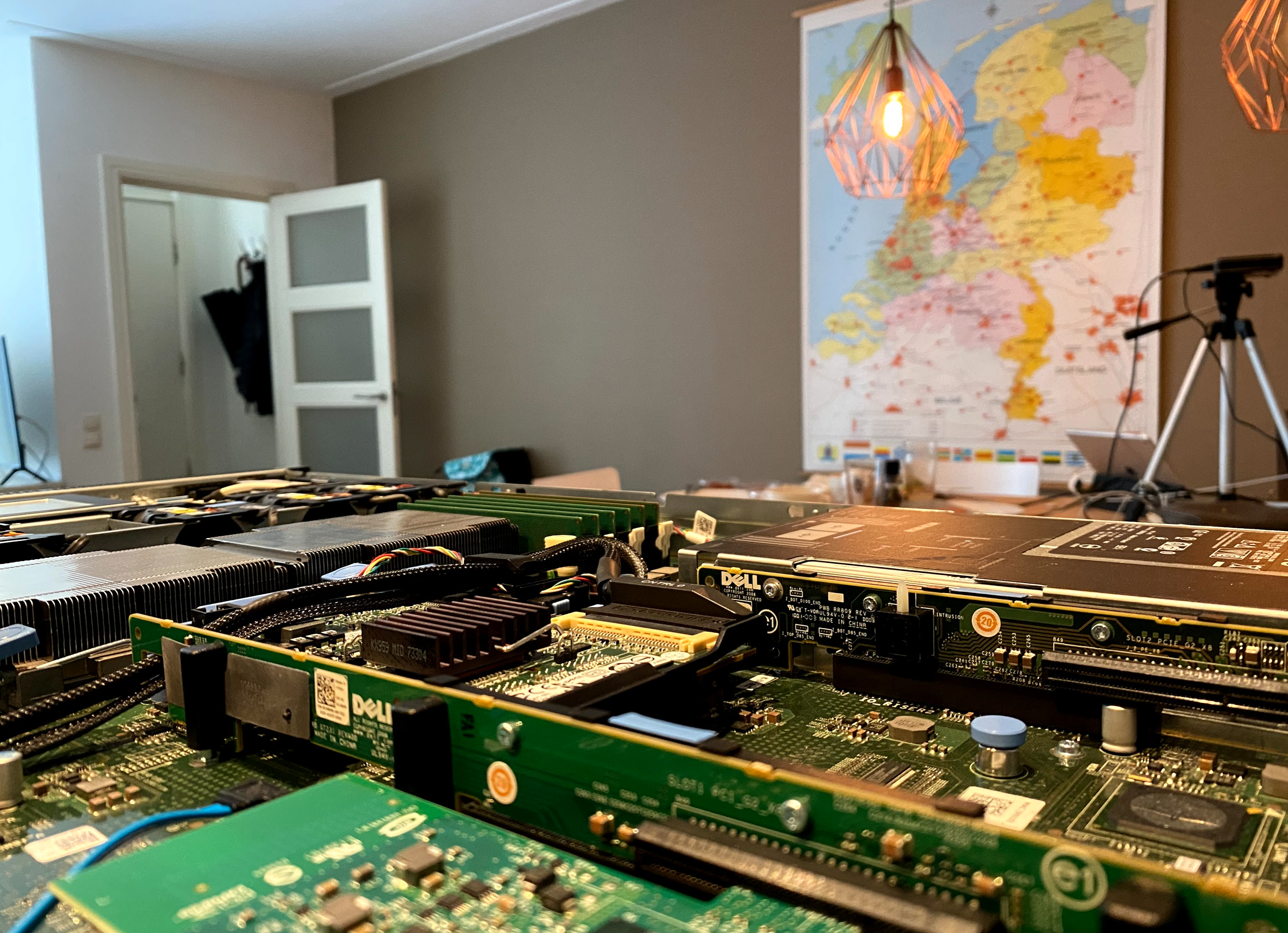 Besides the staging, we also ate some pretty delicious food:

But we also took the time to explore a little bit, for example on Kaz’s new boat through the canals and over the river Amstel. But mostly: we sat home and enjoyed our quarantine the best we could :-)

First before the day started, I drained the Frankfurt-Anzin link by raising OSPF cost on er01.fra01.ip-max.net and er01.lil02.ip-max.net while Fred notified customers and the IP-Max team of the impending update to the network.

We met up with ERITAP on Monday 24th, or target deploy date. We had labeled and packed up all of our gear, grabbed the car, and made our way to the Watergraafsmeer to the place where the Internet landed in Europe in 1982. Almost 40 years later, here we are: IP-Max is moving in!

The physical work was not very exciting. The Nexus, ASR, two APUs and my own Supermicro were racked in only a few minutes. But then the interesting bits begin – how do we connect all of this without making a Kabelsalat that you so often see in people’s racks. 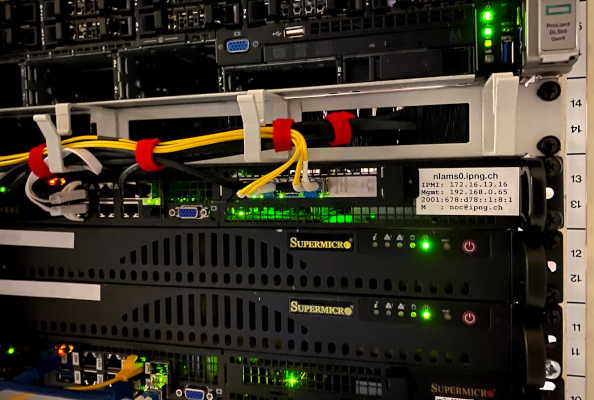 But yet at the same time, both Fred and I were enthusiastic and couldn’t wait to see the ping time to Anzin and Frankfurt from here. I left Fred the honors to connect his own brand new er01.ams01.ip-max.net by opening the patched through loop from our supplier, and he was beaming once he saw OSPF and OSPFv3 adjacencies and a latency of just short of 6ms. But he was very kind to let me do the second honors to connect the router to Anzin, at just over 5ms. That is a really fantastic performance and very short path indeed. This will be fun for my next adventure, I’m sure. We’ll see the Dell pictured above appear as frlil0.ipng.ch but I get ahead of myself ..

After we connected the whole thing up and did extensive ping tests, we undrained the spans and saw a respectable 600Mbit of traffic traverse the new router. Because there were a few other folks tinkering in the rack (for example our friends from Coloclue we decided to adjourn for the day and visit Paul and Henrieke up in Almere for a fabulous homecooked meal (thanks again for the Picaña!) and we enjoyed being followed by the cops when driving back out of Almere – but we were not bothered/hassled by them. 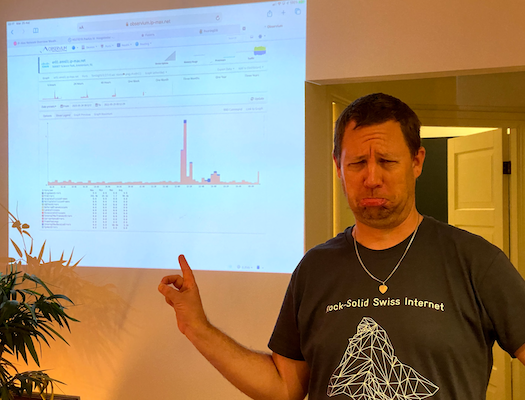 But then (and this is technically day 2 because it was, let’s just say, well after midnight), as the IP-Max network calmed down for the night I did my stress test and came to a horrible surprise, interface errors! They were Frame Checksum Errors and while the performance from defra0.ipng.ch to nlams0.ipng.ch was impeccable (9.2Gbit, yaay), the transfer speeds on the reversed direction did stall out at about 35Mbit. That is NOT what the Doctor ordered!

So luckily we had already decided to go back for a day2 to complete the rack install, mostly for things like the fiber patch panel for IP-Max customers in the ERITAP rack, and to ensure that our power, serial and network cables would not come loose, because packets don’t like loose cables. Certainly we should avoid the electrons or photons falling onto the floor…

But the weird thing about my link errors (as seen by the ASR9k) was that usually the problem is either a duplex error (which was OK), or a dirty fiber or transciever (which was unlikely considering this link was a SFP+ DAC!). So that leaves either a faulty Cisco or a faulty Supermicro, neither of which are appealing.

On day two, after breakfast, we had to do a few chores first (like the claim for the VAT for imports, see our previous post, and as well get a corona PCR test for the way to France (which was absolutely horrible, by the way, I still feel my nose which was violated). So we hit NIKHEF at around 4pm to finish the job and take care of a few small favors for Coloclue, ERITAP and Byteworks, who are also in the same rack as IPng and IP-Max.

After I replaced the DAC (ironically with an SFP+ optic), once OSPF and iBGP came back to life, this is what it looked like: 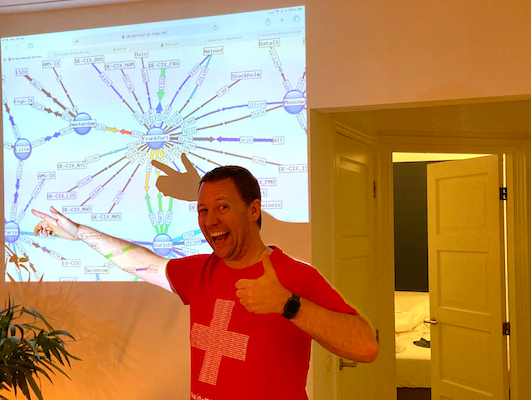 That will do, thanks. I cannot believe that the latency from my basement workstation in Brüttisellen, Switzerland, to the local internet exchange is 0.8ms, then through to Frankfurt at 6.2ms and then all the way to Amsterdam the end to end round trip latency is 12.2ms. I can stare at the smokeping for hours!!

So I spent the reminder of the night hanging out with Fred while pumping 9Gbit in both directions for 2 hours while traffic was low. It’s one thing to do an iperf in your basement rack, but it’s an entirely different feeling to do an iperf spanning three countries in Europe (CH, DE and NL). I will note that the spans from Zurich to Frankfurt didn’t even get warm, although the one from Frankfurt to Amsterdam kind of broke a sweat for a little while there …

And the coolest thing yet? We’re not done with this trip.