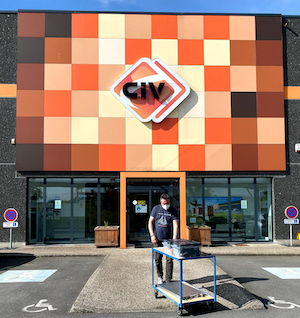 After our adventure in Amsterdam, and after Fred and I both got negative PCR test results, we made our way down to Lille, France. There are two datacenters there where IP-Max has a presence, and they are very innovative ones. There’s a specific trick with a block of frozen ice that allows for the facility cooling to run autonomously in case of a chiller or power failure. I got to see the storage of the icecube :)

Now, because Fred is possibly even more enthusiastic about our eurotrip than I am, he insisted that I also put a machine here in Lille, even though originally it was meant to be only Frankfurt, Amsterdam, Paris and Zurich. After some tough negotiations, I reluctantly agreed. While I did not have a Supermicro, I did have some freshly procured Dell R610s, the old machines from Coloclue AS8283, which they have recently upgraded to newer routers. I installed the pair at EUNetworks for Coloclue, and another team mate installed the pair at DCG/NorthC, after which four of these units were left written off and available. And I would not be me, if I were not to accept some perfectly valuable second hand vintage Dells :-)

So the plan is: we drop an R610 here now, and I ship a replacement standard issue Supermicro + APU3d3/WiFi later. 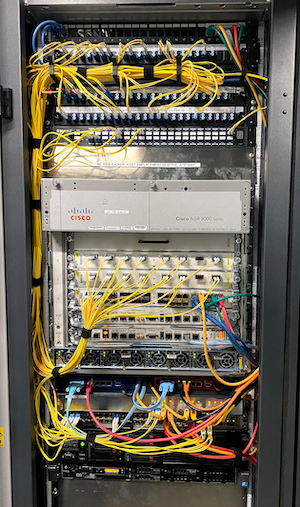 By now I’m getting pretty good ad creating L2VPN EoMPLS circuits, so I created one for myself from the Amsterdam router er01.ams01.ip-max.net to the one here at er01.lil01.ip-max.net. The one here is a Cisco ASR9006, a respectable machine. In the second point of presence, in the neighboring town of Anzin, there is an ASR9010 called er01.lil02.ip-max.net but that one is tucked away in a telco room reserved for deities, not in the normal serverroom which is available for plebs like me.

The inbound span goes from Amsterdam through Antwerp (Belgium) and Brussels and finally landing in Anzin, and from there it’s dark fiber to this rack. I realised that because I use UN/LOCODE that I should be precise in my naming. The town here is a suburb of Lille, the country’s fourth biggest city after Paris, Marseille and Lyon. The town itself is called Sainghin-en-Mélantois, which resolves to FR GGH and thus my temporary Dell R610 will be called frggh0.ipng.ch.

Fred happened to have a spare Intel X552 in his bag, so I commandeered it and gave the machine two legs of Tengig, one going to the ASR9006 and the other going the Nexus3064PQ under it. Soon, we will connect here to the local internet exchange Lillix. There are very few non-locals, let alone international members at LilleIX, but considering larger clubs like Zayo require two or more french peering points, this will be my ticket to some pretty good peers. Nice!

The idea is that one VLL lands me on Amsterdam, and the other will eventually land me on Paris at Telehouse TH2. But that will be after the weekend, as first we need to spend some quality time exploring Lille and recreating the grignotage (English: nibbling) that must be done in the north of France.

As always on the IP-Max network, they speak for themselves. During daytime, the connectivity from my basement to Frankfurt is at 6.7ms, to Amsterdam it’s 13ms and all the way to Lille it’s 20.3ms, with throughputs that are, let’s just say, line rate booyah!

After the weekend, we’ll be driving on to Paris to complete the ring, after which I will have two different ways to traverse – clockwise from Zurich to Geneva, Paris, Lille, Amsterdam and Frankfurt, or counterclockwise on the same ring. There will be 10Gbit between each of my routers in each direction. We do not compromise on quality, throughput or latency over here.

I could not be happier with the service provided so far. Paris, here we come!!